Imagine yourself in the following situation: You sign up for a psychology experiment, and on a specified date you and seven others whom you think are also subjects arrive and are seated at a table in a small room. You don't know it at the time, but the others are actually associates of the experimenter, and their behavior has been carefully scripted. You're the only real subject.


The experimenter arrives and tells you that the study in which you are about to participate concerns people's visual judgments. She places two cards before you. The card on the left contains one vertical line. The card on the right displays three lines of varying length. 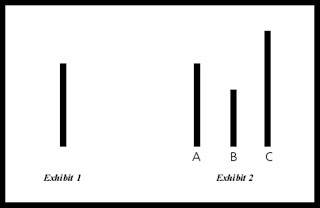 The experimenter asks all of you, one at a time, to choose which of the three lines on the right card matches the length of the line on the left card. The task is repeated several times with different cards. On some occasions the other "subjects" unanimously choose the wrong line. It is clear to you that they are wrong, but they have all given the same answer.


What would you do? Would you go along with the majority opinion, or would you "stick to your guns" and trust your own eyes?


In 1951 social psychologist Solomon Asch devised this experiment to examine the extent to which pressure from other people could affect one's perceptions. In total, about one third of the subjects who were placed in this situation went along with the clearly erroneous majority.


Asch showed bars like those in the Figure to college students in groups of 8 to 10. He told them he was studying visual perception and that their task was to decide which of the bars on the right was the same length as the one on the left. As you can see, the task is simple, and the correct answer is obvious. Asch asked the students to give their answers aloud. He repeated the procedure with 18 sets of bars. Only one student in each group was a real subject. All the others were confederates who had been instructed to give incorrect answers on 12 of the 18 trials. Asch arranged for the real subject to be the next-to-the-last person in each group to announce his answer so that he would hear most of the confederates incorrect responses before giving his own. Would he go along with the crowd?


To Asch's surprise, 37 of the 50 subjects conformed to the majority at least once, and 14 of them conformed on more than 6 of the 12 trials. When faced with a unanimous wrong answer by the other group members, the mean subject conformed on 4 of the 12 trials. Asch was disturbed by these results: "The tendency to conformity in our society is so strong that reasonably intelligent and well-meaning young people are willing to call white black. This is a matter of concern. It raises questions about our ways of education and about the values that guide our conduct."


Asch conducted a revised version of his experiment to find out whether the subjects truly did not believe their incorrect answers. When they were permitted to write down their answers after hearing the answers of others, their level of conformity declined to about one third what it had been in the original experiment.


Apparently, people conform for two main reasons: because they want to be liked by the group and because they believe the group is better informed than they are. Suppose you go to a fancy dinner party and notice to your dismay that there are four forks beside your plate. When the first course arrives, you are not sure which fork to use. If you are like most people, you look around and use the fork everyone else is using. You do this because you want to be accepted by the group and because you assume the others know more about table etiquette than you do.

Asch found that one of the situational factors that influence conformity is the size of the opposing majority. In a series of studies he varied the number of confederates who gave incorrect answers from 1 to 15. He found that the subjects conformed to a group of 3 or 4 as readily as they did to a larger group. However, the subjects conformed much less if they had an "ally" In some of his experiments, Asch instructed one of the confederates to give correct answers. In the presence of this nonconformist, the real subjects conformed only one fourth as much as they did in the original experiment. The dissenter's answers made the subject more certain that the majority was wrong. And the real subject now experienced social pressure from the dissenter as well as from the majority. Many of the real subjects later reported that they wanted to be like their nonconformist partner (the similarity principle again). Apparently, it is difficult to be a minority of one but not so difficult to be part of a minority of two.


Some of the subjects indicated afterward that they assumed the rest of the people were correct and that their own perceptions were wrong. Others knew they were correct but didn't want to be different from the rest of the group. Some even insisted they saw the line lengths as the majority claimed to see them.


Asch concluded that it is difficult to maintain that you see something when no one else does. The group pressure implied by the expressed opinion of other people can lead to modification and distortion effectively making you see almost anything.


Implications for us and the oppressed animals

The more there will be people who will claim that our society has to stop killing animals for food, the easier it will be for others to agree with this claim, because they will see that there is not unanimity in the society on this issue. If this claim is never expressed it will be very difficult for people to agree with the opinion that we have to stop killing animals for food. Creating a public debate on this issue by making the claim that slaughterhouses have to be banned will create a situation where there will be more discussion on the subject and more people will be aware of our claim and because of the Asch effect the practice will be seen less and less normal. The conversion to veganism strategy without the creation of a public debate will have a very little effect. Every time when we make a flyer, when we are interviewed, when we debate etc. we have to clearly state that we demand the end of the killing.
killing.
Posted by Abolition of Veganism at 4:54 AM